Code Geass Gaiden to be Split Over 4 OVAs

It’s been a while since anything new was announced in regards to Code Geass Gaiden, but we now have a bit more information about it.

“According to Ichiko Hashimoto, the lady behind the music in the Code Geass spin-off, the show will be a four-episode OVA that will premier in cinemas before seeing a DVD/Blu-ray release around three months afterwards. The episodes will also be around 50 minutes long.”

The first of these OVAs will be shown in the summer.

*Credit to Japanator for the info*

I am sad to say I have yet more bad news for Anime and Manga fans – the Bakuman Manga is going to end on Monday 23rd of April.

Unlike Bleach, Gintama and Beelzebub which all had their Anime cancelled, Bakuman ending appears to be the choice of the two authors themselves. Even so, it’s always a shame when a series like this comes to an end, particularly one as enjoyable as Bakuman.

Here’s what was recently said to confirm the news:

“Tsugumi Ohba and Takeshi Obata are ending their Bakuman manga series in this year’s combined 21st/22nd issue of Shueisha‘s Weekly Shonen Jump magazine on Monday, April 23. The magazine asks their fans to look forward to their next work. The 18th compiled book volume will go on sale on May 2, and the 19th and 20th volumes will follow in June and July, respectively.

The manga has been running in Shonen Jump since 2008. Viz Media is publishing the 11th volume of the manga in North America in June. The manga inspired three television seasons, and the third one will premiere this fall.”

*Credit to Anime News Network for the info* 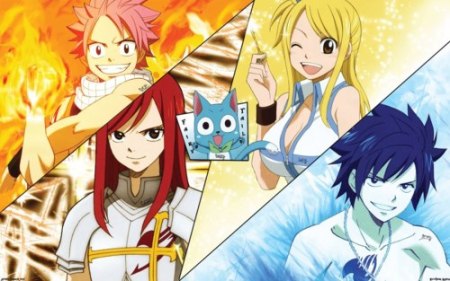 Good news for fans of Fairy Tail – A new trailer has been released for the movie! Unfortunately there are currently no subtitled versions available, but below is the original Japanese one in any case.

*Note: If I find a video that has subs I may add it in future, but I cannot translate it myself, so please no comments asking me to do so*

Earlier this year we heard the news that Masashi Kishimoto would be involved with the new Naruto Shippuden movie, titled  “Road to Ninja”. Well now I am happy to say that a new trailer for the movie has been released!

I unfortunately can’t embed the video on this site, but you can watch it by visiting TV Tokyo’s official website

It’s only 27 or 28 seconds long, but it looks fantastic so far. I don’t want to spoil what little we are shown, so I won’t comment about the details here.

What I will say though is I am really looking forward to it just from seeing the short trailer alone, so be sure to let me know your thoughts on it – including things like how can some of the stuff we see in the trailer be possible – in the comments section below!

Since originally posting this, someone has uploaded a subtitled version of the trailer on Youtube, which you can watch here 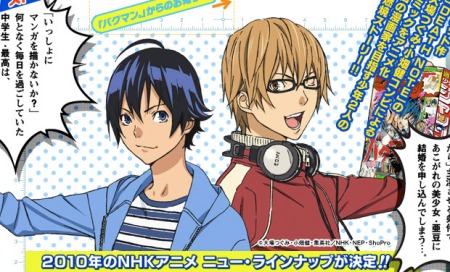 As the title says, Viz Media have aquired the European rights to the Anime series of Bakuman. This was revealed in a statement released by the company itself:

“VIZ MEDIA EUROPE is pleased to announce the acquisition of  TV, VOD, DVD, Blu-ray and merchandising rights for the “Bakuman” licence for France, Italy, Germany, Spain, Portugal and the United Kingdom.

From the creators of Death Note, Bakuman is the latest hit TV series to be based on a top-selling manga title by Takeshi Obata and Tsugumi Ohba, with millions copies sold in Japan and published in France by Kana, Viz Media in the UK, Panini Comics in Italy, Norma Editorial in Spain and TokyoPop in Germany. Directed by Kenichi Kasai (Honey and Clover) and Noriaki Akitaya (Code Geass), Bakuman TV series is broadcast on the NHK channel in Japan.

With Bakuman, Takeshi Obata and Tsugumi Ohba radically changes the subject and theme from his work on the captivating thriller of Death Note in order to suck us into the backstage world of manga creation. The series is a realistic, funny and surprisingly immersive look into the dream industry of many teenagers today. The authors pays close attention to developing the main characters of this TV series – two passionate teenagers who will never stop dreaming about publishing their first manga.”

This news has genuinely made my day, I can’t tell you how happy I am to have some kind of confirmation that another series of Hanasaku Iroha is going ahead. As those of you who read my review of the first series will know, I am a massive fan of Hanasaku, and this news has made me feel over the moon!

Of course there is no word as to when the series will be ready for release, but the mere thought of more Hanasaku is enough to keep me happy.

*Credit to Crunchyroll for the info*

That’s right, Masashi Kishimoto himself will be involved with the next Naruto Shippuden movie. So far, this is what is known about his involvement:

“The latest Japanese issue of Shonen Jump featured the announcement that Naruto creator Masashi Kishimoto will be providing the story and character designs for this summer’s Naruto movie, Road to Ninja. The feature, which celebrates 10 years of Naruto anime, is scheduled to hit Japanese theaters on July 28th.”

Judging from the picture used, it appears as if Tobi will be involved in some form, as will Minato and Kushina. This is all my own speculation as I have heard nothing official about it, but if it does prove to be the case, anything that does have Minato and Kushina in is fine in my book.

*Credit to Crunchyroll and Shonen Jump for the info*